Find the tutorial in the attached repo.

This is a tutorial for the Standard Bank Tech Impact Challenge: Xente credit scoring challenge. The objective of this challenge is to predict from transactions and repayments the likelihood of default in each transaction. This is a binary classification problem where the output should be 1 for a defaulted loan and 0 otherwise.

Loan default occurs when a borrower fails to pay back a debt according to the initial arrangement. In the case of most consumer loans, this means that successive payments have been missed over the course of weeks or months. Fortunately, lenders and loan servicers usually allow a grace period before penalizing the borrower after missing one payment. The period between missing a loan payment and having the loan default is known as delinquency. The delinquency period gives the debtor time to avoid default by contacting their loan servicer or making up missed payments.

There is a grace period in which the date on which the borrower is set to pay the loan or rather a portion of it is exceeded. The loan does not default immediately, that period is called delinquency. It would logically be a good feature to extract. If someone is not defaulting on loans but is missing a lot of payments they may be more likely to default soon.

Note that it is a work in progress. Ask Blenz questions or make suggestions on the discussion board. 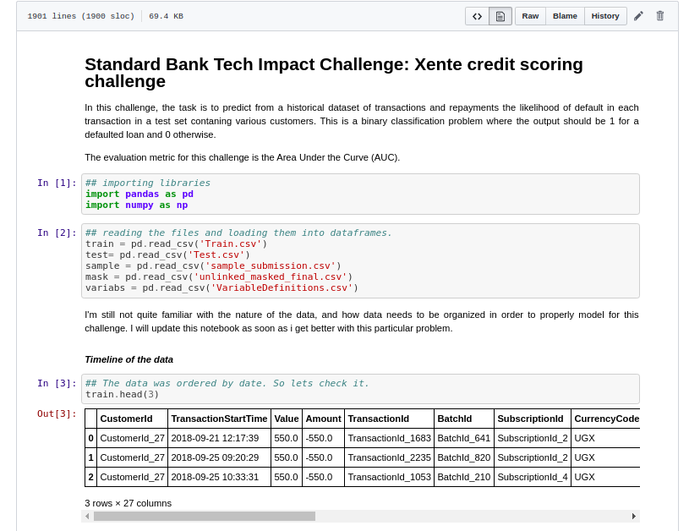 My name is Mohamed Amine Benlamine. I am a Business Intelligence Engineer turned Data Scientist. I am from Nabeul, Tunisia. I recently started competing on Zindi after Instadeep introduced me and many others from Tunisia to Zindi. I currently work as a Data Scientist in Neopolis Development, a company based in Nabeul.

I think data science is doing great in Africa. Nigeria's already trying to put in place 1 million data scientists for the future, Tunisia and many other countries are embracing the AI wave. And thanks to Zindi, we are able, as Africans, to compete in real problems affecting Africa which is great.