My solution consists of these four steps

1. Predict the sequences in which goals are occuring.

Essentially the core observation is, that time-intervalls in which goals occur are much longer.

In Most cases this yields a feature that can be used to predict accurately if a goal has been scored. 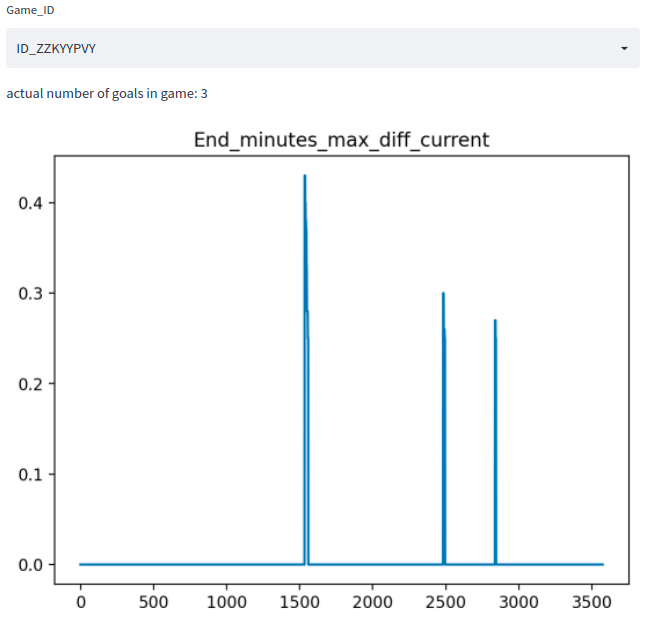 Using a simple thresholding-technique we can get an accuracy of ~ 99% on the train-set, where accuracy here means the number of games in which we accurately predict the number of goals.

2. Predict the team that has scored the goal.

One key-feature here is the proximity to the goal. The closer we are to a goal the more likely it seems that the score has been made on that specific goal. The below plot shows an intervall in which a goal was scored. The X-axis is the observation, Y-axis is the X-Position of the observation. The generall Trend here is that the larger the X-Value the more likely it is that this team has scored. 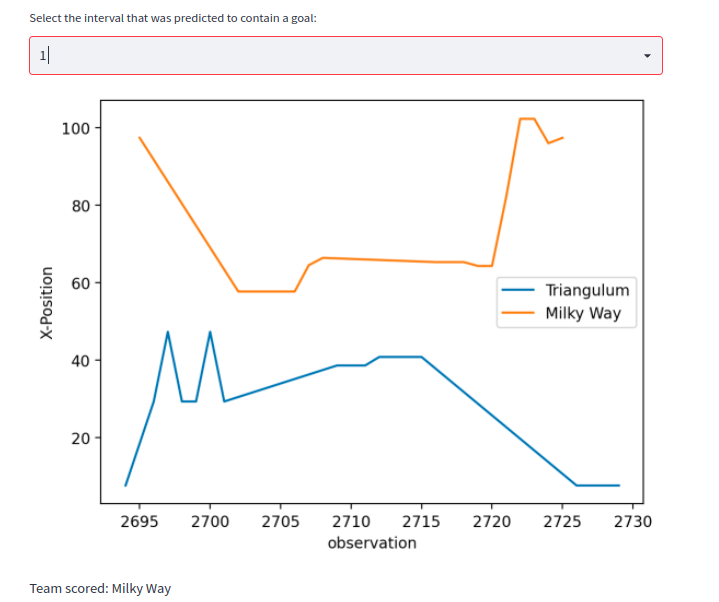 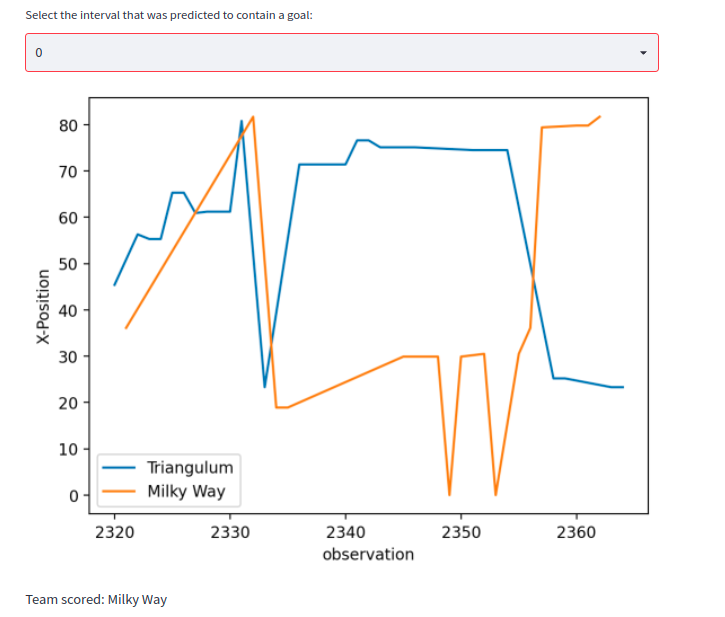 Simple methods like using the mean or median of the X-Position and predicting the team with the higher value as the attacker only gave an accuracy of ~ 70%.

Hence I resorted to a ML-Approach. The features Team-Name and the X,Y-Position for each observation in the time-intervall were used. All of these observations were concatenated in a single row, with a maximum set to 40 observations. This gave me 40*3 columns as features. For the target I noted the team that had scored. I generated the features and the target for all of intervalls that contained a goal. I then used a catboost-classifier to predict which team had scored the goal. The classifier reached a reasonable performance of 97% accuracy.

The catboost-model gives us for each goal that has been scored the probabilities for each team. Simply using the max and predict that as the winner yielded a very poor score on the leaderboard. What worked better was performing monte-carlo-simulation. Essentially I did the following:

Given is a game a number of goals and a list of probabilities for the home-team to have scored each of the goals. I can use the binomial-distribution to simulate one trial essentially simulating if a goal has been scored or not. If the outcome of one trial is positive, home-team scores otherwise away-team. I can do this process for all goals. Doing this for all goals is one trial. At the end of the trial I can determine the outcome, home-win, draw or away win for that specific trial. This process is repeated 100_000 times and the mean is taken. This is the predicted probability.

The code for the simulation: 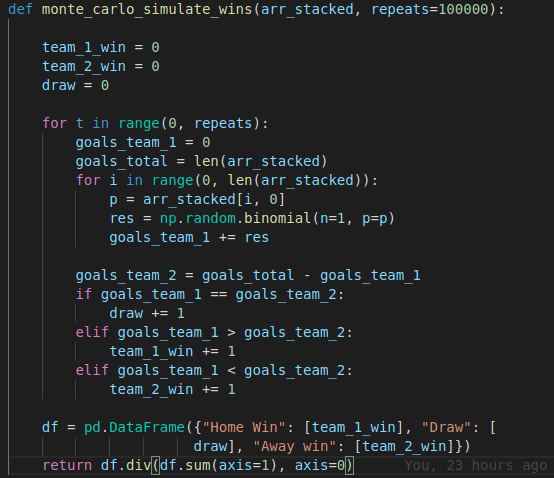 arr_stacked has the shape (number of goals, 2) where the columns are the probabilities for each team that it has scored.

Admittedly a better approach would be to simply calculate the probabilities combinatorically instead of doing this simulation. However I ran out of time, at the end of the competition and this approach was quick to implement ;).

4. Blend with a model that only takes as input the non-stats-part of the data.

Credit goes to @Mkmworld as I took his Baseline Approach (publicly shared in the Discussions) for the blend. 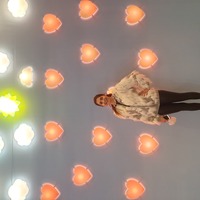 very nice, thanks for sharing

Thank you for sharing.

I followed a similar approach, but your approach is far better than mine in some of the steps, most obvious being your step 1 where you use 2 lines to go to where I got after Feature Engineering, Keras and more to get to the same point.

To be honest I had a much more complex approach at first too. Then I wanted to add some more features and stumbled accross this feature a day before the competition was closing. So I guess it was kind of lucky of me to find this feature ;).

Would love to see your code for the Monte Carlo stimulation, Great solution

Thankyou. I have added a screenshot of the code to the coresponding section in my post.