Approximately 1.35 million people die each year globally as a result of road traffic crashes. The United Nations’ 2030 Agenda for Sustainable Development set an ambitious target of halving the global number of deaths and injuries from road traffic crashes by 2020.

In South Africa alone, approximately 1 million road accidents are reported each year, resulting in approximately 31.9 fatalities per 100,000 people each year. This fatality rate could be dramatically reduced by ensuring that authorities are able to respond to reported incidents as quickly and efficiently as possible.

The objective of this challenge is to build a machine learning model that accurately predicts when and where the next road incident will occur in Cape Town, South Africa. Data scientists will build their models on historic road incident data as well as traffic pattern data from Uber.

The resulting model will enable South African authorities to anticipate where they will be needed next and to put measures in place that will help ensure the safety of all Cape Town’s residents.

Uber Movement is a website that helps urban planners, city officials, riders and the public better understand the transportation needs of their cities. Presently, Movement shows average travel times between zones in a city, derived from anonymous and aggregated on-trip data from Uber vehicles. Uber is planning the next set of functionality and datasets that will be added to Movement in the coming months. Uber Movement is available for 22 cities around the world.

The South African National Roads Agency SOC Limited, generally known as SANRAL, is an independent, statutory company registered in terms of the Companies Act. The South African government, represented by the Minister of Transport, is the sole shareholder and owner of SANRAL.

SANRAL has a distinct mandate – to finance, improve, manage and maintain the national road network (the “economic arteries” of South Africa). SANRAL is committed to carry out its mandate by protecting and preserving the environment through context-sensitive solutions.

The Cape Town Freeway Management System (CT FMS) is a project jointly funded by the CoCT, PGWC and SANRAL. The operations of the CT FMS are located in the Cape Town Transport Management Centre (TMC) in Goodwood. Operators are responsible for visual surveillance of the freeways to detect any freeway related incidents, to report the incidents to the relevant authorities as well as to provide information to the driving public using Variable Message Signs (VMS) located along the freeways and a Twitter Website.

The CT FMS currently has 239 CCTV cameras, 50 Variable Message Signs, 82 vehicle counting/detector stations and 10 weather stations to monitor and manage the major freeways around Cape Town. The freeway network monitored by the CT FMS operations, per road authority is illustrated in the Figure below. 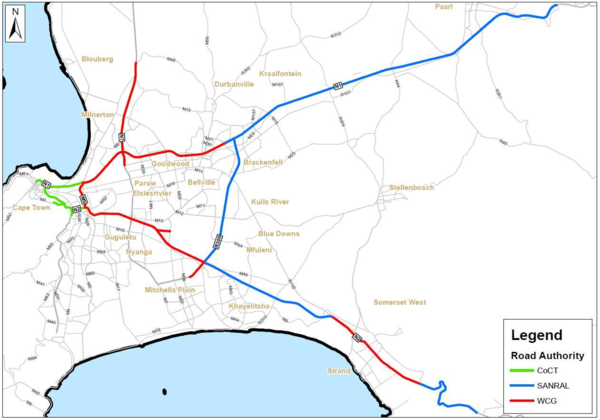