The start of September saw folks from all over the AI space converge in Cape Town for the AI Expo. There were so many different things happening, but the one that led to this post was a hackathon run by Zindi for their most recent Knowledge competition: the MIIA Pothole Image Classification Challenge. This post will cover the basic approach used by many entrants.

The dataset consists of images taken from behind the dashboard of a car. Some images contain potholes, some don’t – the goal is to correctly discern between the two classes. Some example pictures: 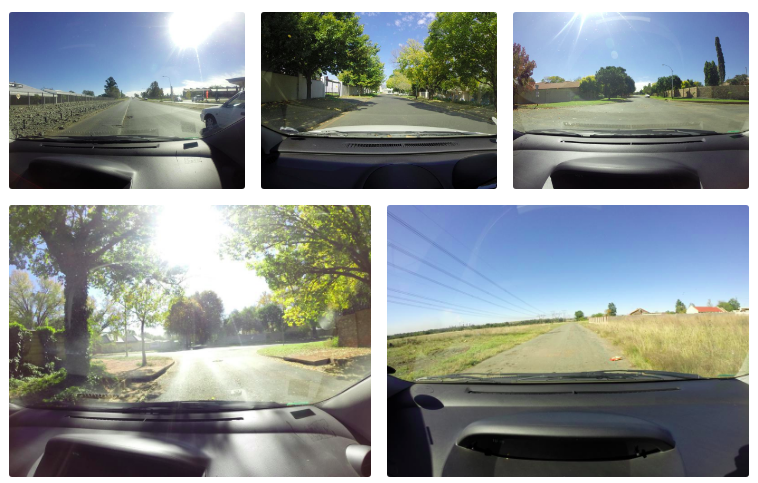 Train and test data were collected on different days, and at first glance it looks like this will be a tough challenge! It looks like the camera is sometimes at different angles (maybe to get a better view of potholes) and the lighting changes from pic to pic.

Jan won a previous iteration of this hackathon, and was kind enough to share a starting notebook (available here) with code to get up and running. You can view the notebook for the full code, but the steps are both simple and incredibly powerful: 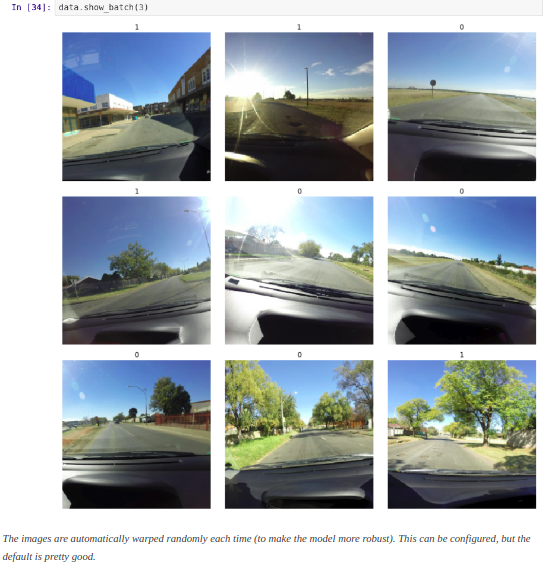 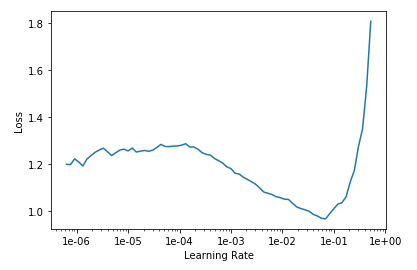 There is some extra glue code to format things correctly, find the data and so on. But this is in essence a full image classification workflow, in a deceptively easy package. Following the notebook results in a log-loss score of ~0.56, which was on par with the top few entries on the leaderboard at the start of the hackathon. In the starter notebook Jan gave some suggestions for ways to improve, and it looks like the winners tried a few of those. The best score of the day was Ivor (Congrats!!) with a log-loss of 0.46. Prizes were won, fun was had and we all learned how easy it can be to build an image classifier by standing on the shoulders of giants.

As the day kicked off, I dropped a few hints about taking a look at the images themselves and seeing how one could get rid of unnecessary information. An obvious answer would be to crop the images a little – there aren’t potholes in the dashboard or the sky! I don’t think anyone tried it, so let’s give it a go now and see where we get. One StackOverflow page later, I had code to crop and warp an image:

I ran my code to warp all the images and store them in a new folder. Then I basically re-ran Jan’s starting notebook using the warped images (scaled to 200×200), trained for 5 epochs with a learning rate of 0.1, made predictions and…. 0.367 – straight to the top of the leader-board. The image warping and training took 1.5 hours on my poor little laptop CPU, which sort of limits how much iterating I’m willing to do. Fortunately, Google Colab gives a free GPU, cutting that time to a few minutes.

Thanks to Google’s compute, it didn’t take long to have an even better model. I leave it to you dear readers to figure out what tweaks you’ll need to hop into that top spot.

My key takeaway from this is how easy it’s become to do this sort of thing. The other day I found code from 2014 where I was trying to spot things in an image with a kludged-together neural network. The difference between that and today’s exercise, using a network trained on millions of images and adapting it with ease thanks to a cool library and a great starting point… it just blows my mind how much progress has been made.

Why are you still reading this? Go enter the competition already!

Jonathan Whitaker (Johnowhitaker) enjoys playing with data, writing tutorials and sharing his findings as he trawls through the world of data science. Johno was the 2nd Zindian to join Zindi and we are grateful for his contributions to the platform.

You can read the original blog here: https://datasciencecastnet.home.blog/

Johno has a ‘tutorials’ section and a datasets page cataloging useful sources from around the web and any new data he has generated.